Deep breath... we're back from the hospital, and we're over the moon because there is a little baby in my tummy! We were both very nervous as we went in for the scan but the (lovely) Australian sonographer Megan found the baby straight away. It was amazing to see the image of our baby on the screen, and to hear it's heart beating. 180 beats a minute - I suspect it's going to be something of a multi-tasker like its mother! It took me a moment to comprehend that the picture was of my baby - I'd been so fearful that something had gone wrong and that today would reveal a missed miscarriage.

It was such a relief to see the pictures and know that everything is going according to plan. The looks I shared with the Boy in the room were very special ones that I won't forget in a hurry. The only slight hiccup was that we're not as far along as we had originally thought - the doctor had worked out I was 12 weeks today, when actually I'm only 10 weeks six days. This means we have a new date, the rather brilliant date of 1 November - or 1/11/11. That appeals to my OCD side! And hopefully is a date the Boy should remember...

As we weren't 12 weeks the sonographer couldn't do the tests for chromosome disorders like down syndrome. So we have to go back next Monday for another scan, when they will team the information with the results of my blood tests and give us our odds of having a baby with disabilities or problems. In an ideal world it would have been great to get this wrapped up today, but I don't mind going back again in a week's time and getting another look at our baby! I can't wait to see him or her again.

The sonographer made us laugh at one point. She had a student in the room with her who was observing the appointments today, and while the sonographer was looking at the baby's heartbeat she said "and there's another one". The Boy and I both thought she meant there was another baby in there (!) but fortunately she was just saying to the student that my baby was too small for the tests as well, as the woman and baby before us had been, so the student wouldn't get to witness the nuchal testing process in this appointment either.

So, for now we can relax a bit. There's still a long way to go but everything is as it should be. It's fantastic to look at the print-outs of the pictures we bought at the scan and begin to fantasise about the little baby that is growing inside of me. And I'm so excited as tomorrow we go to Venice with the Boy's parents and his brother to celebrate the Boy's mum's 60th birthday, and when we get to the airport, the Boy can give her one of the pictures from the scan as an early birthday present. I can't wait to see her face... 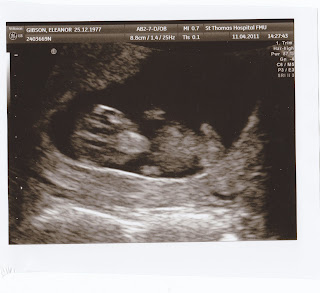 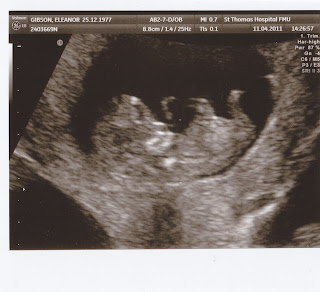