Today we've been celebrating the Boy's birthday. He has reached the ripe old age of 32, even though he still looks (and acts!) as if he's in his late teens. We had a lovely meal out last night and then both had the morning off from work - the Boy gets this as a perk of his job and I felt it would be rude not to join him. So we had a lazy start - felt very indulgent for a school day - and he opened his presents in bed, accompanied by a cinnamon whirl (his favourite breakfast!) with a candle in it, courtesy of his lovely wife ;-) 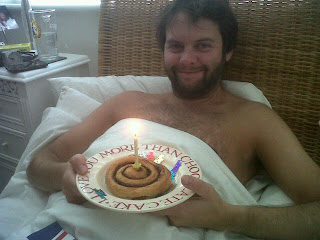 Birthdays are a good chance to reflect on years gone and years to come - and hopefully the Boy and I have many more of them together. And it's been quite a year. It was around his birthday last year we decided we definitely felt ready to try to a family. Things happened fairly quickly and I fell pregnant in January. But of course as we know that wasn't to be. The whole process took us a bit by surprise really - I don't think either of us thought that a year on we wouldn't have a baby or be pregnant... but we had no idea when we started this journey how few days a month there were that you could conceive, and we also had no clue how many babies don't make it the whole nine months. That's probably a blessing though, as with all those scary statistics in hand I think we would have been much more fearful - I'm glad we weren't, and that we got to experience a little true, real joy along the way.

But birthdays are also a good time to stand still, take stock and enjoy the here and now - and I think the Boy and I need little reminders like this right now as the big picture can be a bit overwhelming for us. I can't imagine that we could be any happier, and the roller coaster that this year has been has shown us every side to the other, and in the face of adversity we've pulled closer and tighter. We've been engulfed by love and support from friends - and my girlfriends and sister have been particularly brilliant in the last week or so, conscious that I might be stumbling I've had a lot of kind emails, texts and phone calls that have helped keep me focused on the big picture - and comments readers of this blog have left have also touched me.

While this year has been tough emotionally and I feel mentally wrung out and exhausted, it's been very good for us financially. The Boy has worked out we have substantially increased our assets since March, and for the first time in my adult life I am not in debt and have savings in the bank - such a big release. We've decided to shelve plans for a move for another 12 months as at the moment we can comfortably pay the mortgage, have a good quality of life, and save a good amount of money each month for the future. We also love our flat and the neighbourhood where we live. Why rock that boat when we don't have to?

So, for the rest of the day, I'm going to try and thing about all the good things I have in my life, rather than the one thing - and I think it is the only thing - that is missing. With these strong foundations in place, if we can keep ourselves happy and healthy, then I'm sure in time our dreams will come true and everything will fall into place.
Posted by Elly Beans at 15:25