The Boy and I had some sad news last night. A friend of ours - a former colleague and very close friend of mine - committed suicide on Saturday. We had lost touch with him in recent years as his increasing mental health problems had made his behaviour very difficult and erratic. While we did what we could to be understanding and supportive, he had deliberately moved away from older friends in the last few years - finding it easier I think to spend time with newer acquaintances who didn't know his full history.

I was aware he had been through some very dark times and he had gone missing a few times, once for months on end. So I suppose in truth, deep in my heart I had wondered if this day might come and I might hear this news. He had been so very troubled and unable to find peace in this world. But it is such a loss - he was a very warm, bright and colourful person, and I have no doubt the world has lost a little bit of light with him no longer in it.

While we hadn't been close for a time, he had been a good friend to me and I have many happy memories of him. I think together we kept some of the landlords in Shoreditch in business, and we took a very crazy trip to Berlin together the two of us just before I met the Boy. He had been the one who helped me move into Empire Towers - the one who drove the van and helped me carry the (very) many boxes up the two flights on stairs to my new flat. And then he was the one who took me to my new local boozer to help me celebrate my new home. In his typical fashion we didn't leave without knowing all the names of the new bar staff!

Today I am thinking of the times we spent together and hoping that my friend has found the rest and peace where he is now, that he couldn't find in this world and in this life. I find suicide so sad. I think it's one of those things that everyone has an opinion about - some think it an evil waste of life, some think it is a selfish act, some think it always wrong, some are left feeling angry and guilty with questions that can never be answered... I've certainly had some black and white ideas about the issue in the past, but this is my first - and hopefully last - experience of losing someone in this way. The feeling that arises in me with this friend is one of tremendous sorrow and regret. That a flame that burned so brightly and was so intoxicating to be around, was slowly subsumed by mental illness and depression until the fire flickered out. Sleep tight my friend, you will be missed. 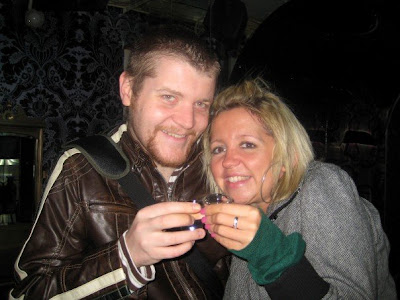