I had a lovely day yesterday. I was on a first aid refresher course at St John's Ambulance in Marylebone the morning, I have to do this annually as I am a nominated first aider at work. I enjoy the course and take confidence from having these skills into my personal life - and I think they will become even more valuable as I become a parent.

In the afternoon I had an appointment to get my highlights done, but my hairdresser was unfortunately unwell, so I found myself with a rare weekday afternoon free stretching ahead of me. It was a glorious afternoon, another cloudless blue sky stretching above London as far as the eye could see, and the temperature must have been touching mid 20s. It felt like we'd fast forwarded to the summer.

Underneath this azure blanket I strolled to my favourite spot to sit and take in the weather, Potters Fields by Tower Bridge. I love it here. Right by the river and sandwiched between Tower Bridge, build at the end of the 19th century, and City Hall, the modern offices built more than 100 years later which are home to the Mayor of London and the GLA. Across the river you see, to the left, the City of London with its office blocks competing to be the first to touch the sky - the Gherkin, my sister's favourite building in the capital, is winning at the moment - while to the right is the Tower of London, swathed in centuries of history and legend. 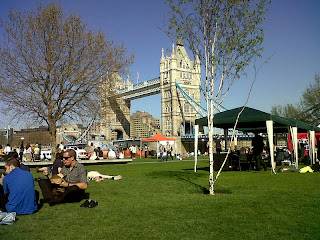 It's a fabulous place to take in a snapshot of what London, my home for the last decade, has to offer. And it's a park enjoyed by many different people - business men on their lunch breaks, students, foreign visitors, and local families from London Bridge, Bermondsey and the docks.

I relished the chance to sit for a few hours in the sunshine, and in that time I read a book from cover to cover in one sitting - absolute bliss! The first time I've done that since my honeymoon in Velidhu in the Maldives nearly a year ago. I read Resistance by Anita Shreve, one of my favourite contemporary authors. She's never going to break any moulds in terms of style and substance, but I love her lyrical, sentimental writing, and how she captures the fragility of the human condition and our relationships so softly and beautifully. The book was one of her better ones, set in Belgium in the second world war it details the story of a small pocket of resistance fighters against the Nazis in a small village, and what happens when an American plane crashes in the forests nearby. A poignant and moving book, that reminds and captures the extreme bravery of some of that generation in the face of such a vile and bleak dictatorship.

It's a simple pleasure, reading a book from cover to cover. But one I had forgotten could be so enjoyable. For a few hours I was taken away from myself to another time and another land, and I walked with the characters as they worked through their feelings and trials. I don't think I'll ever lose the amazement that a book has the power to do that. Although I suspect when I become I parent I will lose the chance to inhale and breath out a text in one precious sitting!

The day ended with a romantic meal by the Thames in Cantina del Ponte - the cuisine giving us a tantalising taste of what lies ahead for us on our Italian adventures. Bring it on!
Posted by Elly Beans at 09:02