In the last week or so I seem to have acquired a baby bump. Either that - or I have been eating too many pies! But I think it's the former, after a (brave!) teeter onto the scales yesterday told me I've put in 7lbs so far - which doesn't sound like a tremendous amount for the halfway stage. But then, I wasn't *exactly* the most slim Jim to start with as my midwife kindly pointed out early on!

It's been exciting to see the beginnings of a bump develop and it helps give me a little more confidence that the pregnancy is progressing as it should be. I still really struggle with anxiety, which I accept now will be the case the whole way through. I am quite a worrier at the best of times - and well, a little extra nerves are understandable and as I can't seem to stop them, I have to learn to live with them!

We have our next big scan next week and the nerves have already begun to creep in, in advance of that appointment. I am absolutely dreading returning to the hospital - for me, the scan means the staff are going to tell me our baby as died... and that is why I feel so reticient. I know in my head that this is completely paranoid and irrational thinking and in all likelihood everything is fine - but my subconscious plays a bit of a game of cat and mouse with me, and I can't always win.

People have started to comment on the bump - and I've had my first taster of folk thinking it's fine to put their hands on your body without asking! Three colleagues laid their hands on my stomach yesterday... I'm guessing this is the start of many more to come - friends with children have warned me about this. It took me a little by surprise and I didn't really like it. Perhaps I will start putting my hands on my non-pregnant colleagues' rotund bellies and see what they make of it ;-) I'll let you know how that goes!

I put up some pictures of our holiday in Wiltshire up on my Facebook profile a few days back, and in a couple of the piccies the bump was evident. I'm something of a prolific snapper and I didn't think about it until I'd uploaded the shots, but people have begun to make comments. At first I panicked and went to take the photo down - I feel like maybe I've cursed myself by being open about the pregnancy for the first time, if that makes any kind of sense? But the Boy stopped me and said he wanted us to share our pregnancy in the same way that other expectant parents do and while he understands me not wanting to put up scan pictures or write status updates detailing the pregnancy, he doesn't see the harm in the odd picture appearing of me looking as I do.

And I know he's right. I have to get past those dark thoughts in my head that everything I do to confirm that I am pregnant somehow 'jinxes' it. I had an initial meeting with HR yesterday - at their behest - to discuss my maternity leave, and I was squirming throughout it. I wanted to tell the woman to shut up, or put my fingers in my ears. Hmm. Probably not what she would have been expecting!

But, deep breath, for today everything seems ok, so for today that can be enough. 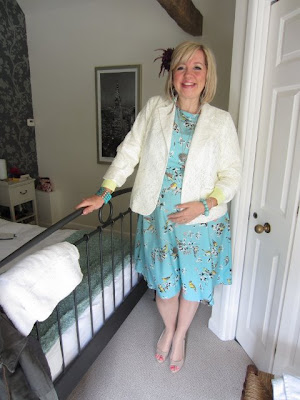