It's a wonderful world

It's not often I talk about my football allegiance on this blog but I hope you'll forgive me if I make an exception today.

For the last 25 years I have been an increasingly passionate supporter of Manchester City football club - our family club on my Dad's side and one he has followed for more than half a century.

In my lifetime, City have been something of a comedy club. Most football fans have been fond of City - in the way one is of a slightly doddery old aunt, or a rather unhinged neighbour who has a tendency for self-embarrassment. City have been a funny, unthreatening club who always produced the unexpected and could go from a glorious league win to being kicked out of a cup competition by Brighton or Doncaster in the first round. When I was at university City were relegated two seasons in a row - we only got promoted back into the old first division by scoring two goals in injury time to equalise against a rather poor Gillingham side back in 1999 and push the game to penalties. And I will never forget a crucial cup game against Sheffield United where the wonderful Joe Hart mistook a balloon on the pitch for the ball - the opposition capitalised and scored, sending City crashing out. That is kind of 'the City way'.

It's well-celebrated that City have had a tendency to blow their chances and shoot themselves in the foot. The easy way is not for City - or their fans - and we have had tremendous highs and lows through the last few decades... consistent only in our inconsistency.

However, one thing has remained constant - that we have lived in the shadow of the far more successful and glorious Manchester United. Affectionately known as 'Manure' by City fans, with Old Trafford - the so-called theatre of dreams - nicknamed 'the swamp'.

In the last couple of seasons, this has begun to change. Now the plaything of a bunch of wealthy Arabs who seem to have a bottomless purse with open strings, City have bought in a huge amount of quality footballers - many on very inflated salaries - and the tide has begun to turn. It culminated last season with a victory over Stoke City in the final of the FA Cup - and this season we've watched one of the most exciting title races in years.

Yesterday was crunch day - City and United shoulder to shoulder at the top of the Premier League equal on points, separated only by City's superior goal difference thanks to a cracking start to the season when we were winning matches 4-0 or more on a regular basis. City chasing their first title in 44 years (they last won when What A Wonderful World was number one in the charts and my Dad was a student at York University!). The nerves started to creep in as I made my way to a local pub with the Boy, my Dad and my Mum to take in what lay ahead.

I won't go into detail now about how all the matches progressed - but suffice to say in the last few minutes it seemed the prize has slipped through City's fingers. Trailing to and unable to break down a 10-man QPR side it seemed once again it would be the red half of Manchester celebrating and revelling in glory. And then the unthinkable happened. A few minutes into injury time City pulled back an equaliser - and then just a couple of minutes later time stopped, and City's player of the season Sergio Aguero found the back of the net with a stunning strike.

And City hearts in Manchester and around the world melted - finally our time had come and the joy and relief of the players and fans was palpable. I have never seen my Dad look quite like that, and I must confess to shedding a tear or two.

When you've supported a team that have broken your heart so many times, and led you more merry dances than you care to remember, a taste of success is even more sweet - the novelty somehow greater and more meaningful. I spent my teens and twenties unable to imagine this day ever coming - winning the league in my lifetime seemed, well, a lifetime away. And to win it this year, so that Baby Beans will arrive with City as Premier League champions, really is the best feeling in the world.

It's a pretty nice view from up here on Cloud 9 - I don't plan on coming down any time soon! (although I do not recommend watching too many games like this when you are pregnant...!). 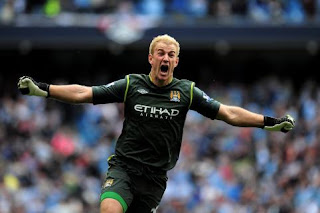 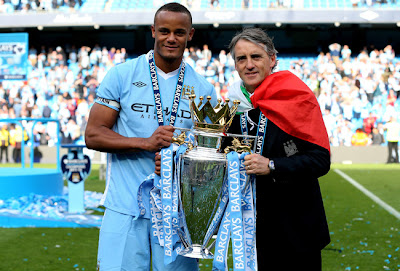 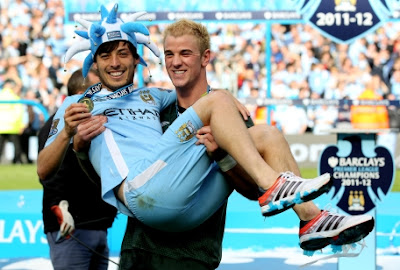 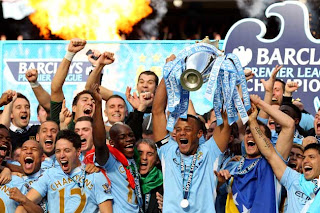