I read - with great interest - a couple of interviews with celebrity Amanda Holden over the weekend. She has just announced that she is pregnant again, following the still-birth of her son in February this year and a prior miscarriage in 2010. I have written in these pages before that I have found her courage and dignity through her experiences something of an inspiration. Living out my loss and grief in private has been enough of an ordeal, so how you manage with your tragedy splashed across the front of the red-tops I can't imagine. But she seems to have borne the experience with great strength and integrity, and I take heart from her happy news. 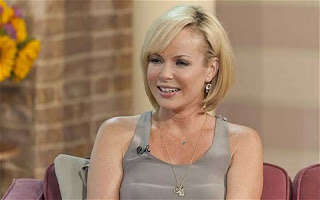 In one interview I read a quote from her which leapt off the page at me: “What’s strange is that from the very moment I found out I was pregnant I knew that I was never going to meet my baby. I don’t know if it was an instinct or mother nature protecting me in some way."

This really strikes a chord with me, and makes me wonder... I had a feeling through my pregnancy that it wasn't going to work out. I talked to the Boy about it, and he listened to my concerns and we talked them through, but we put it down to the fact I can be negative and can feel that I don't deserve nice things or for good times to happen to me. But I had a nagging doubt than ran in the back of my mind all the way along that something wasn't right, and I had several dreams where I lost the baby, it was born premature, or I attended a scan only to be told the baby had died.

I had dismissed my feelings as I didn't think they were particularly helpful, and because I'm unclear whether they really were real natural instinct or if they were rooted in my usual self-doubt. A few weeks ago, we were having drinks with a friend of the Boy's and his wife, who sadly lost a baby in February, and his wife mentioned to me that she had a continuous feeling through her pregnancy that it wouldn't last and that something would go wrong.

So it makes me wonder now... and if I am fortunate enough to fall pregnant again it will be interesting to see if it feels any different or any more 'right'.