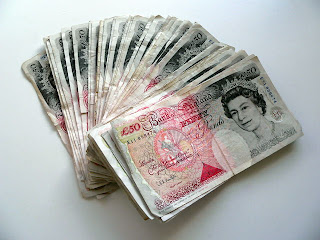 Money and I have never been the best of friends. I've treated money pretty badly and in the past, and on the rare occasions I've ever had any, I've always wasted it. In my 20s my pay cheque was always spent pretty much as soon as it arrived, and I never seemed to have any surplus. Money certainly burned a hole in my pocket and found its way into the tills of various bars and clubs in East London, and into the coffers of numerous chain stores and boutiques up West.

I'm not sure where my laissez faire attitude to cash came from. Both my parents are cautious with money, and have well-replenished savings and never spend what they don't have. I think it began at university, when I was suddenly presented with a credit card, a huge overdraft facility and student loans aplenty, with the notion that you could spend whatever you liked now and then pay it back at some date that was so far in the future it wasn't even a dot on the horizon. My bad habits continued after graduation although, while my spending was consistently reckless, I did always take up second - and sometimes third - jobs to make sure I at least had a steady income and could always pay my bills.

It amazes me still that with this haphazard attitude to spending and saving that I managed to buy my first flat when I was 25, a little two-bedroom place in Bermondsey, with a far more clued up and savvy friend from university. We lived there happily as a south London Will and Grace for three years, during which time I consistently lived on the edge and never had a spare penny left at the end of the month. Instead I crept further and further into the overdraft abyss. Somehow, more by luck and good fortune than any financial acumen, Bermondsey enjoyed something of a renaissance while we lived there and when we sold the flat we each had enough of a lump sum to buy our own places - and hence I arrived at Empire Towers in Borough in December 2006.

The Boy joined me there less than a year later and while we've had some difficult financial periods - notably when he was made redundant in the early days of the recession and we had a few awkward months with only one income - and some stormy waters, we've managed to steady the ship so it isn't leaking funds any more. Now it's starting to feel like we can carry some cargo.

We've both had debts to pay off. I finally faced up to the (rather embarrassingly large) credit mess I was in and have since been chipping away at that weight on my shoulders, and slowly and steadily it has reduced and is now almost gone. In less than a year I've gone from the bottom category credit rating-wise to the second one - only 90 points now off the top one now, where the Boy is. The Boy too had a student debt to sort out, an overdraft to clear and a credit card to pay off. But it finally feels like we are winning and my hope is that by the beginning of next year we can begin saving decent amounts of cash and be completely financially ready for a move of house or a baby - or maybe even both. Empire Towers has gone up enough in value to give us a deposit on a bigger place so it's more to give us peace of mind if we are blessed with a family.

A couple of bits of good news in the last week have cheered us and make me think we are so close to turning the corner and perhaps the finance gods are with us for once... First up, a while back I put in a claim to HSBC to reclaim the Payment Protection Insurance (PPI) that I paid on a graduate loan. It was a bit of a stab in the dark as I wasn't sure I had paid this insurance - I'd just read in the papers and seen online that a lot of people were doing this successfully and so I thought it was worth a shot. I've just received a letter from HSBC telling me my claim has been successful and they will pay back my PPI with interest, in accordance with guidance set out by the financial ombudsman. Early indications suggest I could be owed as much as four figures which would be a welcome bonus. And then yesterday the Boy rang the student loans company to check when his loans would be repaid - and it turns out he has already repaid it and they've been continuing to take deductions from him so he is also due a rebate.

I've always dreamed of the day when money wouldn't be a constant worry, a problem constantly there nagging away at the back of my head like a discontented fishwife. While there's still a long way to go for me and the Boy before that comes a reality, it at least now feels like that day is possible, and that's good enough for me.