Sick as a dog 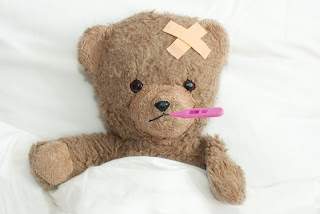 I had a very sudden bout of nausea yesterday that caught me by surprise (and has left me wondering a bit more than I want to be, and getting my hopes up a bit more than I'd like!). It came on around lunchtime and I felt very dizzy and faint. It didn't improve after a couple of glasses of water and a bit of concentrating on my breathing - normally works when I feel like that - and I had a couple of false alarm trips to the toilet, so I ended up coming home from work early and spending the rest of the afternoon in bed. If I've got to talk to the big white telephone, I'd rather do it in the relative comfort of my own bathroom than the work toilets!

I rang the Boy and the first thing he asked me was whether I thought I could be pregnant. I guess bizarrely it hadn't crossed my mind, although of course it is a possibility given that we're trying. I don't want to get my hopes up though as I think it's probably too early for any symptoms, and a work colleague is off with a sickness bug so I suspect it's far more likely to be that. Still, it's a possibility - and that's a nice feeling.

I had a look at early symptoms of pregnancy on the internet - what a mistake! Symptoms of early pregnancy seem to be how I feel most days! Tired, bloated, aching... yep that sounds like how I feel during the working week, although I must admit my job doesn't normally make me want to throw up. Oh the perils of internet self-diagnosis. Researching pregnancy on the internet usually leaves me feeling depressed that it seems to hard to get pregnant and we'll never manage it. This time it was starting to make me feel so excited that I had to move away from the PC before I convinced myself that the pitter patter of tiny feet were on their way. I can't hear any footsteps just yet.
Posted by Elly Beans at 11:43