One big positive about our move to the countryside being delayed until after Baby Beans is here is that we have been in London town throughout the Olympics, and are now still in the capital while the Paralympics is on. I'll readily admit I was a huge sceptic about my beloved capital's ability to host such an event and I too easily believed the harbingers of doom, who warned our transport system would collapse and the whole experience would be a shambles.

On the contrary it has been a fantastic time to be a Londoner. As has been well reported, the atmosphere in the City has been extraordinary and there has been a real sense of belonging, kinship and goodwill around that I have particularly enjoyed. And yesterday the Boy and I got to sample a little bit of this for ourselves with tickets to explore the Olympic Park. 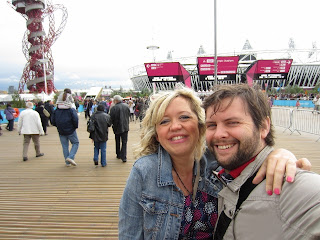 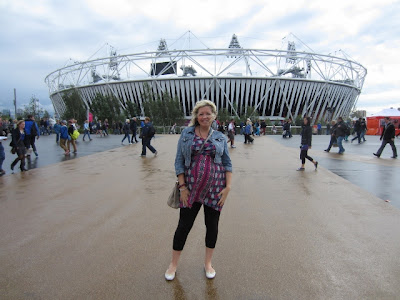 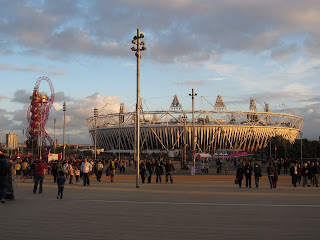 We had a brilliant time wandering - well, waddling! - around and soaking up the sights. The Park is huge which you don't get a feel for on the television, and some of the stadiums are really breathtaking in their design and size. It was great pootling about and we sat down by the river and watched quite a lot of the swimming on the big screen - with the rare treat of a big coffee for me, and a cider and some pork scratchings for the Boy (he is a one for simple pleasures!).

It was inspiring watching people who have battled pain and difficulty excel in their fields. I couldn't believe the ability we saw in the swimming pool, with one of the female British athletes smashing a world record just 15 months after having a baby. Suffice to say I don't think I'll be repeating that feat! But it did make me think a little about what the mind and body can achieve with a bit of focus and dedication.

So yesterday was the starter - on Monday evening we have the main course of an evening of athletics to look forward to, followed by a dessert in the aquatics centre on Thursday night watching the swimmers in person. Well - unless Baby Beans chooses either of those nights to make its entry into the world! We'll see...
Posted by Elly Beans at 12:39