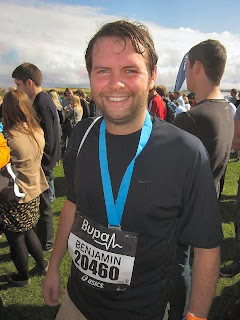 On Sunday the Boy, my hero husband, ran the Great North Run in Newcastle for the Sands charity. It was an incredible day, and I am even more in awe of my Boy than I was before. Sands is a charity that means a lot to us, having lost our tiny baby Beans earlier this year and also having good friends who have been through the terrifying ordeal of having a stillborn child, and I was very proud that the Boy chose to do this event for such a vital cause.

The Boy completed the race - a half-marathon with most of the first-half uphill! - in two hours 19 minutes. He was a little disappointed with this time, but he was carrying a foot injury and I could not be more impressed by him. He ran with his father and his brother, they were all round in two and a half hours, and between the three of them they raised around £1,500 for really important charities.

The day was very powerful. The Boy and I, as is our way, arrived very early so we had plenty of time to find key locations and work out what was what. Local radio was broadcasting from the site, pumping out tune after tune like 'Run', 'Run to You' and - my favourite by far! - 'Born to Run'. The energy of the participants and spectators was palpable, and I haven't experienced an atmospher like it before.

The presenter interviewed lots of the runners about the reasons they'd chosen to take part, and which charities they were running for. I found myself feeling very emotional as I heard the inspiring stories of the perseverance of the human condition in the face of extreme adversity and loss. Almost everyone there was running for someone who is no longer with us, and I found that quite amazing. I couldn't hold back the tears when at 9.45am 'Abide with Me' was played in memory of those who have died - my heart ached for our lost baby Beans, my friend Alex, my uncle, and the two colleagues we've said goodbye to this year. So much loss, so many gone too soon. And a beautiful piece of music and lyrics - if I recall correctly both written by a man who was dying himself.

But in the sadness of that moment there was a tremendous strength in unity. People from all walks of life together as one to take on the challenge, and to grind out those miles to make a real difference for the greater good. I couldn't help but admire that - in fact it almost took my breath away and I found it difficult to keep my composure throughout the day. After the weeks of dissection in the aftermath of the riots - what caused them, why people behave in such away, why there is no unity in communities or respect for others - I was reminded of the potential for goodness and strength in people, and their relentless ability to survive, endure and overcome. I take such heart and inspiration from their courage. 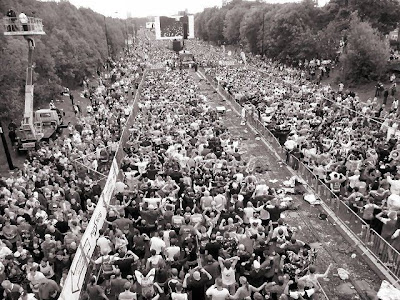